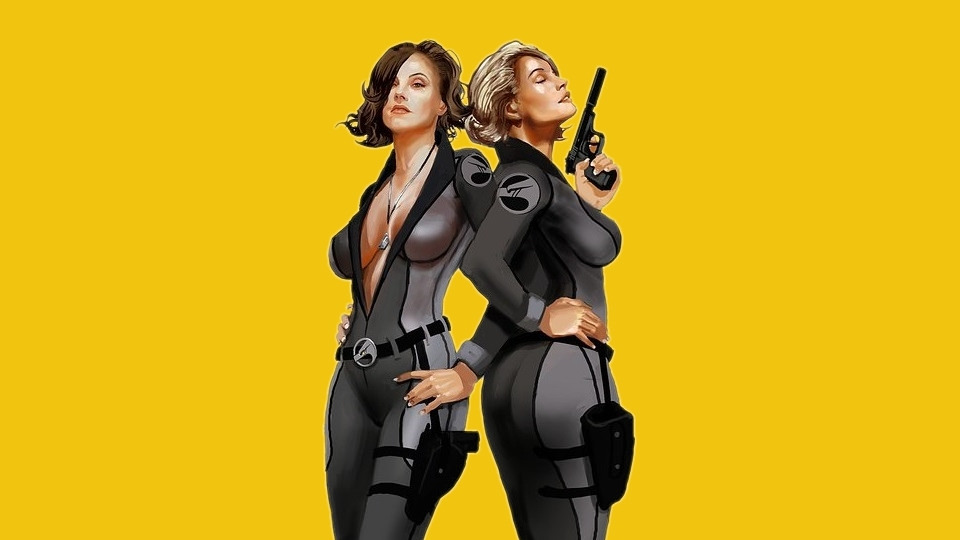 With amazing titles like the Pursuit Force series, Ace Combat series, and The Sims 2, the PSP surely have a great collection of simulation games.

If you’re a fan of both PSP and simulation games, there’s a chance you’ll like this list. 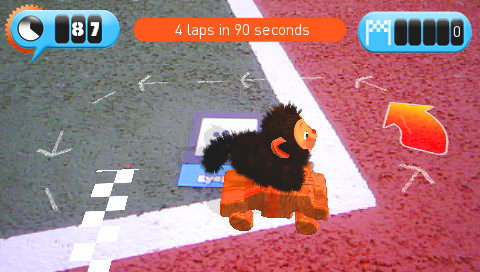 Ever wondered what if Tamagotchi come to life?

EyePet is here to actualize your childhood daydream.

EyePet redefines the pet simulation genre with the advanced usage of augmented reality.

If you have a younger brother or kids this is the game for you, keep your little human busy and accompanied for several hours of fun.

Although the PSP version of EyePet lacks the features of interacting with your pet with hands like in PS3, EyePet still a great pickup for anyone who misses the Tamagotchi era and wanted to keep a virtual pet.

Lack of content is from this game is somewhat a deal-breaker, EyePet can be a bit monotonous after several hours. 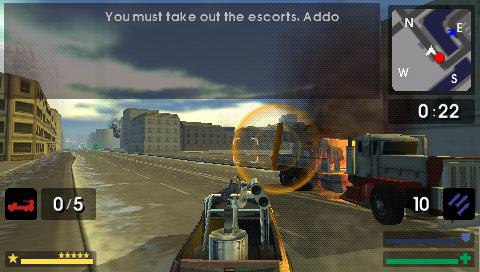 History tends to repeat itself, somewhere in eastern Europe, the evil emperor dictator has started the quest to invade any neighboring country.

Drive and destroy the evil empire’s troops using your collection of weaponized lightweight buggy and help the resistance army to put an end to this aggression.

The graphic and level design was top-notch, the destruction, smoke, and fire effect looks really good for PSP games.

All vehicle choice is distinctive, you’ll really feel that you are driving a different vehicle with different handling, acceleration, and stability.

Fired Up really shine in multiplayer department, get past the singleplayer campaign (which is more like a tutorial for multiplayer) and convince your friend to play this game together for a great party game. 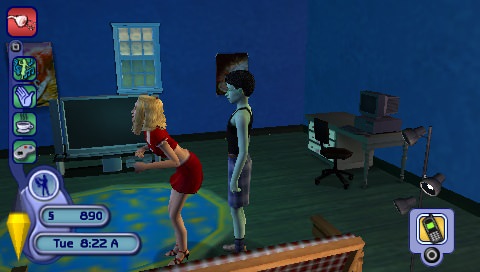 We are back in Strangetown, a town whose weirdly foreshadowed in the name, strange.

Successfully ported from console and PC version, The Sims 2 comes with a superior graphic for a PSP game.

A new feature called sanity meter, would you trade your friend’s secret for money and losing your sanity?

Despite the great gameplay, The Sims 2 also has its own flaws, the constant loading took so long to load and interrupt the game flow.

Overall, The Sims 2 is a lovely addition to your PSP library that still hold the core element from the previous game and lots of new things to offer. 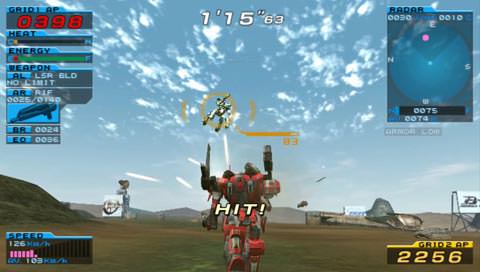 Draft your Armored Core, tune and tweak them to suit your needs, and build the ultimate Armored Core.

A treat to hardcore simulation game lover, choose from hundreds of parts and tweak different parameters to create your best version of Armored Core.

Enjoy the glorious battle effect from your PSP screen—smoke, explosion, gunfire and mech damage will cover your screen in its great detail.

Armored Core: Formula Front Extreme Battle only cater to a small group of niche gamer who loves both mecha and hardcore simulation.

If you’re not both you would find it hard to enjoy this game since the learning curve is quite steep. 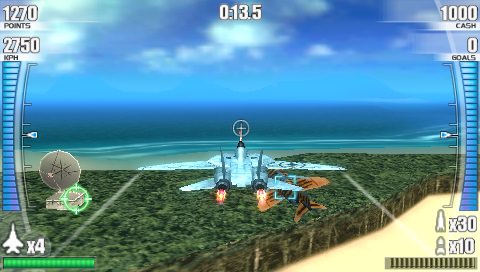 A terrorist organization has infiltrated and fled with 13 military-grade fighter jets.

As the elite military member and notorious jet fighter pilot, it is up to you to take back what is yours.

Play as 3 pilots with a different style of flying in this first arcade-style flight simulator exclusive to PSP.

One thing very crucial in the game genre is the control and After Burner: Black Falcon nailed it.

From acrobatic maneuvers to firing a rocket to other jets is really smooth and handled accurately.

Level design is a bit tedious, blue sky with a pack of clouds and ever-changing terrain.

Black Falcon also could use some upgrade in special effects.

After Burner: Black Falcon is leaning to an arcade simulation game.

For arcade fanatics out there Black Falcon is an action-packed game with challenging enough difficulty and straightforward gameplay. 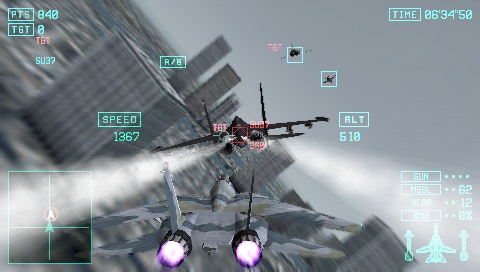 Climb to the cockpit and take control of the skies.

In Ace Combat you are an elite fighter pilot, tasked to take down any enemies you encounter in intense dogfighting thousands of feet above the ground.

More than 40 real licensed fighter jets model to hop on.

Control is a bit frustrating at times, it is obvious that this game isn’t made for PSP.

For Ace Combat standard, the story is a bit tedious and dull.

Just skip the singleplayer and jump straight to the multiplayer mode to really maximize your experience with this game. 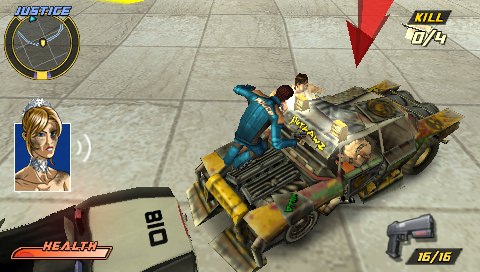 Continuing the story from the first series, you are now a commander of an elite task force in Capital City, given the authority to stop any criminal with any means necessary.

This time it is more extreme.

Honestly, this game exceeds my expectation, adrenaline-packed gameplay fused with a solid storyline.

It is not designed to be the most realistic but to be an enjoyable eye-pleasing experience.

If you love the first Pursuit Force just buy this game and you’re not gonna regret it, proofing that action movie genre game can be exceptionally fun. 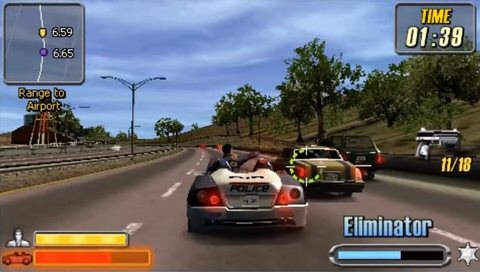 It is not the time for normal police chase where you turn on your sirene and told them to pull over.

It is time for Hollywood style chase, yes I’m talking about shoot-first-ask-later kind of style.

You are a rookie cop, working for Pursuit Force, an elite task force tasked to eliminate criminals all across the country.

Who would’ve thought jumping from car to car as you chase the perpetrators can be so amusing.

Each missions averaging 10 minutes to finish, making this game a perfect handheld game to play while you wanted to kill some times while waiting for someone/something. 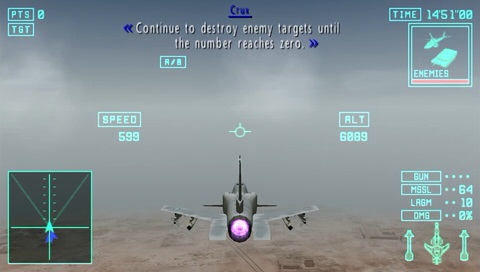 Ace Combat series is all about jumping in the cockpit and intense tactical dogfight in the skies combined with a remarkable storyline.

Take the fight into the skies and restore your home country’s freedom.

A captivating storyline will get you on the edge of your seat every time you play.

Fixed and intuitive control from its predecessor, now you can focus on outmaneuvering enemy dogfighter and blast them with your missile.

All in all a great game for its fast-paced jet combat and immersive environment design. 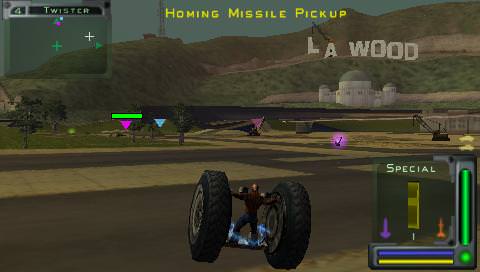 Twisted Metal: Head On is Death Race movie without the race, total destruction in this twisted maniacal vehicular combat game.

Join the twisted metal tournament, where the winner gets all of their wishes granted.

What’s more fun than destroying your way into Twisted Metal tournament other than doing it with your friend?

There is nothing that can top 6 players, duking it out with a missile-firing vehicle.

Determining which PSP simulation game is the best is no doubt a never ending topic, but it’s absolutely fun!